I have longed for an old-school Judge's screen for awhile now, and frequently modified the commercial screens when we gamed in v.3.5 and 5th edition. But I longed for a version of my first screen, Judges Guild's D&D "Judge's Shield" product.

Unlike modern commercial D&D screens, the Judge's Shield, like the later T$R AD&D "Dungeon Master's Screen," had information printed on both sides of the screen rather than player-facing artwork. While this wasn't super-useful except for the players sitting closest to the screen (ha, especially players like me who are nearsighted), the info was there so if needed someone at the far end of the table could shout out "Hey, so-and-so, what do I need at 5th level cleric to turn a wraith?"

(A weird not that the Judges Guild D&D "Judge's Screen" was apparently back in 1977 the highest sold Judges Guild item behind "City State of the Invincible Overlord" yet these screen are almost impossible to find on the used market. Granted they were not as well-made as the T$R version and had to be taped together (my original one is in pretty horrible shape, hey I was 13 years old), but I would expect to see one occasionally.

Shane Mangus over at "Swords Against the Dark" created way back in 2010 an "Advanced Labyrinth Lord screen" which I love and used for my first few Labyrinth Lord games.

I found there were a couple tables I was referring to often (monster experience awards, treasure hoards) that I would like on the screen. So, copied Shane's screen but instead of art on the player-facing side, I reprinted all the table's from Shane's screen. Then, on the game judge's-facing side, I replaced the panel with item information with monster experience point, monster hoard, poison list, and attribute stats.

Ha, then, because I am super nostalgic, I added yellow color same as the old "Judge's Shield."

I printed the resulting copies on 8 1/2 x 11 adhesive labels and tacked them on to an old "Call of Cthulhu" 3-panel screen and it works terrific. No one could read it at our ginormous (12 players!) convention game, it just looked good sitting there.

A brief snippet of the gang's visit for the last DunDraCon to be held in San Ramon, California.

Our friend and D&D buddy Kevin alerted us DunDraCon was moving to the San Ramon Marriott Hotel in 1992 and we have held a game there every year except 2014.

We'll sorely miss it. Back in the 80s conventions were special occurrences rather than regular gigs until DunDraCon moved right into our backyard. It helped that DunDraCon (well, DunDraClone) at the Oakland Hyatt was my 3rd ever D&D convention in September 1981 after GrimCon III in May 1981 also at the Oakland Hyatt and Origins/Pacificon in July 1981 at the Dunfey Hotel in San Mateo.

Ha, we were sometimes the bad eggs, but damn we loved that convention hard for a long time...
Posted by Matrox Lusch at 11:11 PM 1 comment:

The Silver Road game for Troika! role playing is on for an "official" DunDraCon game Friday, February 14, from noon until 8:00pm. I missed getting my usual 6pm Friday timeslot, but, har, Troika! may not have been a game requested by anyone.

Random Addison and myself have been brainstorming each week to come up with a variety of different encounters that will flesh-out the simplicity and genius that be Troika!

Hmmmm, San Ramon Marriott Hotel room 161... wonder what we wrought in there.
Posted by Matrox Lusch at 11:11 PM No comments:

The adventuring party has been headed down long enough into Deep Carbon Observatory to catch a clew about what is kept deep in this underworld..., however this the last DunDraCon in San Ramon, California. Our annual President's Weekend haunt for the past (mumble, mumble) 29 years.

So Sick Rick brought up the idea of his DMing some games which got me hyper-loaded that we could co-DM the last session at the San Ramon Marriott and my brain began to envision all the crazy ways we could throw back to our classic games there.

Our very first year (1992, thanks Kev for cluing us in) we "borrowed" some room with an official game scheduled that had vacated, pretended to be that game, smoked so much weed filling the hall with smoke that two poor dudes couple doors down got busted (we were smart enough to lock the door), and left the commandeered hotel room littered with liquor and beer bottles. My goodness, the expression of that DM arriving early for his 8:00am game.

Early on we mostly commandeered vacant gaming rooms, but we also gamed in the stairwell a bunch (no cameras then and you could smoke in there), hallways were good, and then the standby open gaming rooms.

Well the one thing I'm gonna do is keep it moving, the party this game should either be running or fighting.
Posted by Matrox Lusch at 11:11 PM No comments:

Finally sent my game submission for DunDraCon #44, the last DDC in San Ramon before it heads to a larger venue southerly in Santa Clara.

The world is flat and nothing flies. Birds, flying insects, bats, and even mythical aero-machines had collapsed, lost to past generations. All folks (other than towers' precious few) make hardscrabble living on the dirt.

Today an impossible road appeared, suspended by nullity. A thin silver ribbon stretching up into the sky as far as eyes could see.

Adventure across the Humpbacked Sky. You are a wizard, a warrior, a macrame owl. You travel with your companions from sphere to sphere engaging in quixotic pursuit.

TROIKA! is a simple yet robust rule system. You only need two six-sided dice! Three core attributes govern everything: Skill, Stamina & Luck. No prior rules knowledge necessary. Characters and a simple rules “cheat-sheet” provided.
Posted by Matrox Lusch at 11:11 PM No comments: 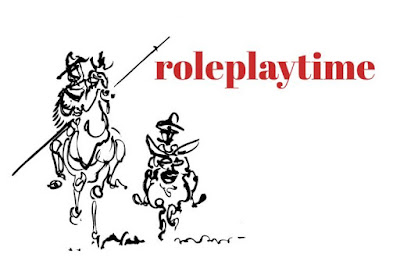 Luka Rejec is a Slovenian game designer, illustrator, and writer based in Seoul, Korea.

October 1st, 2019 is the Tenth Annual DAVE ARNESON DAY, a tribute to the inventor of the role-playing game method and co-creator of Dungeons and Dragons.

Harvards Blackmoor Blog has freebies, articles, and tributes in honor of Dave.

There is a some-what present day intellectual discussion regarding Dave Arneson's contributions, essentially inventing the game style of a referee/entertainer creating and running the game for players who in turn run their player characters.

The discussion coincides with the release earlier this year of the new documentary, "Secrets of Blackmoor." I was able to view the film as a backer of the Kickstarter and it is super elucidating and fun to watch as members of Dave's Minnesota war gaming group describe how their wargames evolved into Arneson's Blackmoor role-playing campaign that preceded the development of Dungeons and Dragons.

T$R published the "Supplement II, Blackmoor" to original Dungeons and Dragons in 1975. After Dave had a falling out with T$R, Judges Guild in 1977 published the maps and game notes of Blackmoor in the now out-of-print "First Fantasy Campaign" which tacked Dave's Blackmoor lands onto the Wilderlands of High Fantasy.

So tip your hat to a visionary man who invented our wonderful and amazing hobby!
Posted by Matrox Lusch at 11:11 PM No comments:

Email ThisBlogThis!Share to TwitterShare to FacebookShare to Pinterest
Labels: literature, World's Most Popular RPG
Older Posts Home
Subscribe to: Posts (Atom)
"Time is not a reality [hupostasis],
but a concept [noêma] or a measure [metron]…"
~ Antiphon the Sophist