*** DROP BOX ISSUE *** APOLOGIES, LINKS ARE MISSING AND NEED TO BE ADDED! 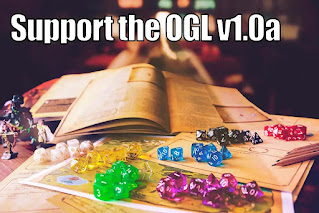 The community has organized to fight changes to the Open Gaming License. One of those points of organization is a change.org petition drafted by Ryan Dancey (you can read Ryan's article on the OGL here). Please sign the petition here.
Posted by Matrox Lusch at 11:11 PM No comments:

"Notes from a clergyman’s journal, hidden vaults of Elven treasure, and an ill-fated excavation to burned-out depths of Talismonde’s undercity was a story told for years (after a few drinks) by the old man now dying of a bloody, hacking cough at an alley in the waterfront district of Arduin’s capital. But wasn’t there word of a hidden map?"
A loose collection of ne'er-do-wells stumble upon the treasure map of an old, dying thief and dare the rotting underside beneath the first true city in Arduin.
This is my entry for DunDraCon #26, about a half-century-old gaming convention out here on the left coast. I typically run a convention game Friday evening and then our regular gaming group runs Saturday night in Open Gaming.
I am coming off a pretty successful swampy-adventure Arduin game down in Fresno at Pig Faced Ork Con last October which followed a fun Green Hell jungle event at DunDraCon #45 last February 2022.
Anyone who has played D&D, in particular OD&D and 1st edition AD&D, will recognize the original trilogy Arduin rules as being very similar. Each game I have been a little better at throwing in more of the Arduin subtleties (for example Arduin's mana point magic system) which has been a lot of fun.
I should learn by mid-January or so if my game is able to be fit into DunDraCon's schedule and am keeping my finder's crossed.
***Arduin is a fictional universe and role-playing system created by David A. Hargrave. “The Arduin Grimoire” was self-published by Hargrave in 1977 and also two follow-up books in 1978, “Welcome to Skull Tower” and “The Runes Of Doom.” The three books became known as “The Arduin Trilogy.”
The original Arduin books added many interesting and notable features to fantasy role playing and were often treated by players as supplements to Dungeons & Dragons.
Posted by Matrox Lusch at 11:11 PM No comments:

Venger Satanis has wrought 10+ pounds in three volumes of gonzo, sci-fi, fantasy inspirations for your game (or a complete setting if you wish to start one). PDFs thrown in free and easy.

$120 within the United States including shipping if you order by Christmas.

And lordy am I a sucker for this sort of gestalt, especially when I am running the gang through an end-times-return-of-the-old-ones-with-a-lochnar scenario. Jiminy Cricket, can you even find all pieces for the Rod of Seven Parts in a night's worth of gaming...? Well, it will be the DunDraCon!
Posted by Matrox Lusch at 11:11 PM No comments:

Buy some and play weird fantasy in your game right away.
Posted by Matrox Lusch at 11:11 PM No comments: 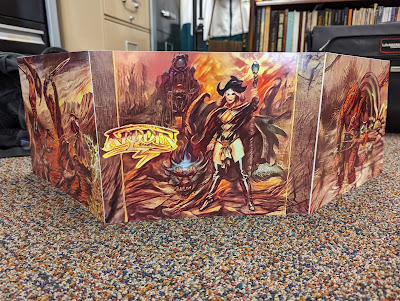 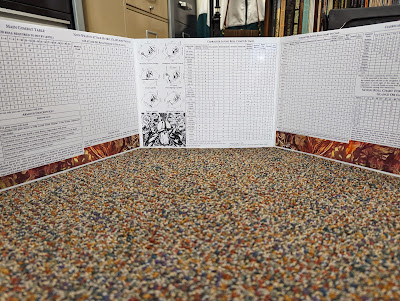 Now that Arduin is my "go-to" convention game, I put together a referee screen with more general Arduin player-facing art. Different than my previous screen which was more tied to the "Green Hell" jungle scenario I ran at the time.

The re-facing tables are all the same, although I have been assembling a rules cheat-book to capture many of Dave's particular rules that made Arduin a different flavor than regular OD&D (ha, some of Dave's variances were later somewhat adopted in other versions of D&D).

I had several pieces of art with different styles, the centerpiece being the art by Frank Kelly Freas from the cover of Complete Arduin. I created a unified motif by running each piece through the A.I. art generator "Deep Dream Generator" which created from the originals similar art in a new style that was the same for each piece. 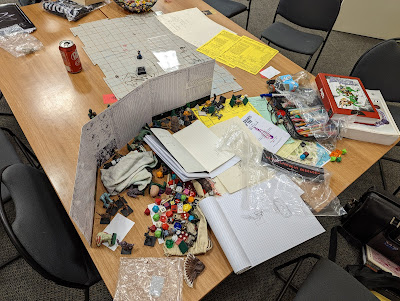 Tom Wendt who runs the damn thing pours his heart and soul in - No reg fee, free giveaway contests and raffles, candy, waters, game judge badges, PIZZA, plus Tom does all the decorative art himself (not to mention advertising fliers) and secures the venue room at the Fresno County Woodward Park Regional Library.

I figure about 9 games were running including AD&D, Arduin (which I GMed), Holmes Basic D&D, Star Frontiers, Traveller, Weird Frontiers and more. Probably 50 gamers in attendance which is pretty good for a one-room con.

Emperors Choice Games and Miniatures asked if I would run an Arduin game there which worked out perfectly 'cause my partner Heidramor happened to be attending to a friend's baby shower in the area that day. I had run an Arduin game at DunDraCon last February. Each session is getting me better and better versed in the technical adjustments Dave Hargrave included for his game.

The end result is that now I have an Arduin-specific game bag set aside to run Arduin adventures. 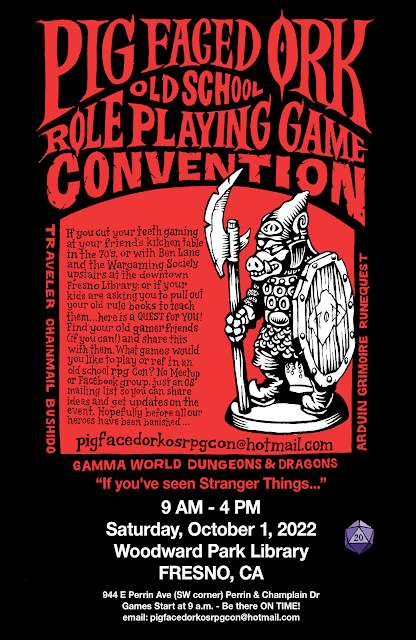 Email ThisBlogThis!Share to TwitterShare to FacebookShare to Pinterest
Older Posts Home
Subscribe to: Posts (Atom)
"Time is not a reality [hupostasis],
but a concept [noêma] or a measure [metron]…"
~ Antiphon the Sophist